I’ve said it before: I don’t believe in ghosts and I won’t until the day I pass a phantom iguanodon in the street. It’s one thing to believe steadfastly in cold, hard logic and another thing entirely to maintain that confidence alone in the dark. You’ve heard that old saying–there are no logicians in freaky basements.

Nor are there any of these guys. Hopefully.

1. There are dark nooks and crannies everywhere. It’s hard not to feel like you’re being watched.

2. The floor has some suspicious body-sized lumps in it.

3. The whole room is sprinkled with a light dusting of dead cockroaches. In fifth grade, a boy told me cockroaches could survive a nuclear holocaust. Something in my basement is worse than that.

4. The one time my roommate, Adrienne, and I took my lovable kitty Winston Purrchill into the basement, he panicked and ran back upstairs faster than I’ve ever seen him move. It scared Adrienne, and although I pretended it was only interesting, I was pretty shaken up. Aren’t animals supposed to be some kind of harbingers of doom? (See: coal mine canaries, those lying Yellowstone bison, etc.)

I came home from a trip late Friday night. Adrienne had left for the weekend several hours before, so the house was empty and dark when I arrived. I could hear Winston (moon of my life) yowling inside the house, so I found my keys as quickly as possible in the dark. When I opened the door, I could just barely see him sitting in the middle of the kitchen floor. Between us, the basement door yawned open horribly.

I had to save Winston (my sun and stars) so I swallowed my fear, slammed the basement door shut and scooped him up. “It’s ok, cat butt,” I said. “It’s ok. I wonder why Adrienne left that scary door open?” He licked my face to indicate puzzlement, but deep inside we both knew it wasn’t Adrienne. She doesn’t like the basement either. She’d never leave the door open like that.

A list was forming in my head and I was trying desperately not to pay any attention to it.

Reasons the Basement Door Was Open

3. A mini earthquake or a strong breeze opened it. Like from the dryer maybe?

4. A raccoon has forged some kind of bond with sweet little Winston and is using its bandit paws to open the door so it can kill the roaches downstairs.

5. Someone is living in a dark corner down there and is getting sloppy about covering their tracks.

6. Dinosaur ghosts are coming to teach me a lesson about hubris.

I sometimes work on Saturdays so that I have money to care for my poor, defenseless orphan cat, to whom I am giving the best years of my life. I didn’t sleep much the night before, so I missed my alarm that morning. In my rush to get to work, I almost didn’t notice that the basement door was once again hanging open. I closed it and tried to stop thinking about it.

When I came home later, the door was mercifully closed. I collapsed on the couch in relief and my devoted kitten curled up under my arm. Soon we were both asleep, and that’s where this story gets truly horrible.

Sometime later, a creaking door woke me up. I thought Adrienne was home, then remembered she wouldn’t be back yet. Strangely, Winston hadn’t heard anything and was still snoring like a baby angel.

I turned my head—oh wait. No, that’s not right. I tried to turn my head and nothing happened. Nothing happened when I tried to move any of my muscles except my eyes. It was like they’d all simultaneously mutinied against my brain. As I was processing this horrifying new fact, I felt something enter the room. Someone was in my home.

And now, a brief tangent.

Sleep Paralysis: The Worst Thing, Oh I Don’t Know, Ever?

According to Wikipedia, sleep paralysis occurs when your body is interrupted mid-REM cycle, when it’s shut down to prevent you from acting out your dreams. There are three common, vivid hallucinations people have during these episodes:

1. Vestibular Motor Sensations–An “out of body experience” that makes it feel like you’re floating above your body or looking at it from a distance.

2. Incubus hallucinations–This one makes you believe that a demon (A DEMON) is sitting on your chest, strangling you while you’re frozen in place.

3. Intruder hallucinations–Your brain, freaking out about losing control, goes into emergency mode and immediately imagines that something evil this way comes in an effort to save your life. 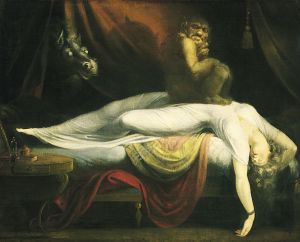 I’m not super sure what the horse has to do with it.

I had never experienced sleep paralysis before, so I didn’t know it was all in my head. I’d like to say that while I was trapped in my own traitor body, I was fighting to get up and attack the intruder, but that would be a lie. As soon as I saw that I wasn’t going anywhere, I decided the best strategy was to embrace the paralysis and pretend I was already dead, ruining all the fun for my would-be murderer. If that didn’t work, I was prepared to accept my fate as long as I could save young Winston (the light of my life).

I stared at the ceiling waiting for death, but before it came, I blinked. I blinked again. I wiggled a toe experimentally and then snapped upright, holding Winston (now awake and grumpy) like a gun. There was no one in the room.

I took a deep breath and ran to check the basement door. I don’t know what I would have done if it had been open—presumably I’d still be screaming—but it was shut tight. I thanked every deity from every religion, scientology included, and kissed Winston (the apple of my eye) on the head until he wiggled out of my arms.

I’d just settled down with a cool glass of nice, not haunted water, when I heard the door creak open again. My heart sinking, I turned slowly to look. Winston Purrchill (dirty rotten traitor) looked me dead in the eye, pulled his paws out from under the door and pranced down the steps like he’d done it many times before. Which, as I now knew, he had.