After the Shirtstorm of ’99, I developed a new philosophy on smells. It had become clear to me that scents of any kind bring the sort of unwarranted attention that gets you sent home in some other kid’s ugly sweatshirt. I didn’t want to smell bad, but I also didn’t want to smell good. My main goal in life became smelling like nothing at all.

For more than a decade, I thought I was succeeding. No one ever asked me what kind of delicious perfume I was wearing and no one ever discreetly backed away from my foul stench. As long as I practiced basic hygiene, I was pretty sure I had achieved some kind of unscented nirvana, previously inhabited only by pure water and iocane powder.

You know when Vizzini sniffs it and says, “I smell nothing”? That’s how I want people to remember me.

Then I started dating Jordan. I don’t mean to get all mushy here, but…

– That guy smells like a cinnamon stick and a vanilla bean had a fancy baby that never poops and was baptized in the finest cologne.

– He smells like a dew-covered forest situated high atop a German mountain that’s full of manly trees, manlier flowers, and unicorns.

– He smells like a mild-mannered scientist who was in a freak accident that somehow inserted spearmint and honey into his genetic code and now his superpower is incapacitating villains with his scent alone and delivering them to the police station while they sit in a daze, awash with memories of sweet youth and sunshine.

What I’m trying to say is, he smells so good that standing next to him for the first time made me immediately aware of my failings. I have not reached nirvana at all. I am so far from it that it’s actually pretty disgusting.

– My clothes smell like cheap laundry detergent, because that’s what I buy. Also, sometimes I run out of quarters for the dryer so I just lay the clothes out to dry, and maybe I’m being paranoid, but I think they smell a little mildewy. I’M A MILDEWY MONSTER.

– My body smells like a body and I can’t get it to stop. I can use all the soap and deodorant that money can buy, but at the end of the day I still smell like an anxious, sweaty little human who eats too many sandwiches.

– My car smells like Taco Bell. I’m torn on whether or not this is a bad thing.

– My apartment smells like the 1970s. And dinosaur ghosts.

Deodorant had not yet been invented at the time of their death.

It didn’t take long for me to realize that my relationship was the scent version of Beauty and the Beast, and I was not the pretty one. In my hour of need, I turned to my closest friend, the internet. As always, it was full of great advice. “Use a crystal! It’s not weird,” the internet said. “Stop eating peppers forever. Get a Botox injection in your sweat glands.” Let me make this clear: I’ll do anything for love, but I won’t do that. I needed a better solution, and that’s when AskMen recommended I find a signature scent.

The idea is to pick a scent you like and make it yours by surrounding yourself with it. Say you pick vanilla. Buy vanilla-scented soap, perfume or cologne and lotion! Put vanilla air fresheners in your car and home! Carry a lit vanilla candle with you everywhere you go! Steadily buy all the vanilla plantations in the world until no one on the planet can smell vanilla without thinking of you.

A trip to the store revealed that finding a signature scent I liked would not be as easy as I’d hoped. It turns out they don’t make those little pine tree air-fresheners in “old baseball mitt”, “wood stain”, or “1993 volvo that may be leaking fuel”.

I was resigning myself to a life of eternal stench when I saw something out of the corner of my eye: a pumpkin spice air freshener. This was it. In fall and winter, in spring and summer, I was going to smell like a spicy pumpkin. People would smell Jordan and me from a mile away. We would be the most beautiful-smelling couple in the history of the world. 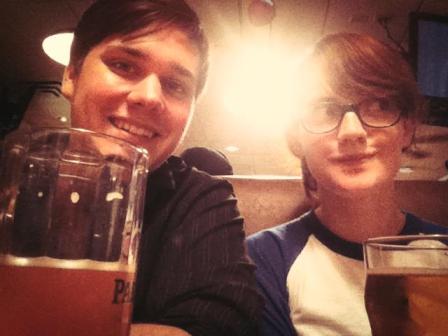 Then the only problem I’ll have to solve is why I look like Hermey the Elf in this photo.

I went home, thrilled with the first purchase in my pumpkin spice empire, and plugged it into the wall. That’s when a horrible thing happened. The air freshener did its job. Way, way too well.

Things to Know About Plug In Air Fresheners

– They’re strong. Much like celery, plug in air fresheners will force their essence into everything good around them and ruin your life. Everything I own smells like pumpkin spice. I can smell it from outside my apartment. On the bright side, I saved on perfume.

– They do not fade. The package said the scent would level off after three days, but I’ve had mine for more than three weeks and it’s as strong as ever. A coworker asked if I’d been doing a lot of baking recently. One night around 10:30, Jordan told me I smelled like my air freshener. I had not been in the same building as the plug in since 7:45am.

– They probably won’t set your house on fire. Probably. The internet can’t make up its mind. The company says they won’t, but I bought renter’s insurance just in case. Now I’m worried it actually will catch on fire and everyone will be very suspicious of my new insurance policy.

I can’t get away from the smell. I wake up from pumpkin spice-scented dreams. It’s in my hair. It’s on my skin. It’s in my soul. I have to get rid of this scent if it’s the last thing I do. I’m not sure which one of us is going to start it, but there’s only one way this can end. It’s clear that I’m going to have to watch my home go up in pumpkin spice-scented flames.

Some air fresheners just want to watch the world burn.