As verbose as some of my blog posts can be, I’m a pretty quiet person in real life.

I come from a family of bookish nerds, so I’m introverted by nature and nurture, which probably has something to do with it. Another piece of it is self-preservation, I guess. Years of observation have taught me that sometimes stupid things come out of people’s mouths. I still say the darndest things, so it’s not like silence makes me immune, but it definitely cuts down on the sheer volume of dumb things I could be saying.

On the other hand, I can say dumb things without actually speaking.

There are some serious drawbacks to being quiet, though. I regularly get knocked over by people who don’t hear me behind them, and I’m 90% sure that if I choked to death in my apartment, no one would notice for a few days. I could probably solve those problems by wearing jangly jewelry and buying one of those Life Call things, respectively, so they aren’t high on my list of grievances, but there’s one side effect of silence that really bugs me. Because I don’t talk much (unless I’ve had two or more beers and then good luck), I think a lot of people assume I’m boring or don’t have much of a personality. This is not cool. There’s a host of negative adjectives I’d rather have applied to me than boring.

Things I’d Rather Be Than “Boring”

Unfortunately, I can’t really take issue with being characterized that way. I don’t base jump. I’ve never swum with sharks. I’m not a tortured artist. One time I accidentally stole a pair of bowling shoes, but that’s about as wild and crazy as I get. Frankly, I am kind of boring. I knit for fun. I spent last weekend stripping the paint off my old, weird-looking dresser. Sometimes I catch myself sitting on the couch, zoning out and staring at the wall. I wish that was a joke.

This should be a non-issue, because I kind of like being boring. I just feel really, really guilty about it. This is partly Theodore Roosevelt’s fault and partly due to my poor small talk abilities. It’s one thing to think, This furniture project is inexplicably fulfilling! I think this is the path to enlightenment! I’m zen now! Who needs the Buddha!? It’s another thing to go into my staff meeting on Monday mornings and say, “Uh. I took the paint off a dresser this weekend and it was… it was kind of fun.” It’s even worse when a date asks about my hobbies and I have to say, “Um. I have this dumb blog?”, which doesn’t even begin to cover the emotional wringer these posts put me through more often than not. 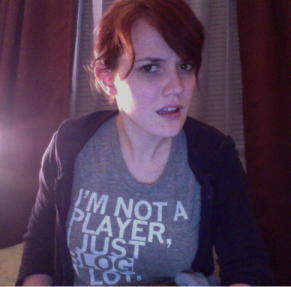 I make this face throughout the entire writing process.

I don’t think I’m that dull, either. Just because I’m not talking doesn’t mean I’m not having a thrilling internal debate on the merits of Han Solo versus Indiana Jones, or thinking about how I’d like to be made into a diamond upon my death. (I want to be put into a tiara and stipulate that one of my friends wears it at all times.) Also, sometimes weird things happen to me, like the time I answered the door for the police without pants on, or the time I went out with Mitt Romney’s bus driver, who turned out to be secretly kind of famous. On the other hand, I think Zeppo Marx could say weird things happened to him. There’s a chance I’m just the occasional straight man to a zany universe.

The problem is that very few of the exciting things that happen to me are 100% workplace- or date-appropriate. Sometimes when I get home from work, I sit around and watch reruns, but sometimes I practice making pterodactyl noises, which is the opposite of boring. Unfortunately, I can’t really tell anyone about that because there’s a fine line between being exciting and being crazy, and I’ve never been great at those subtle distinctions.

Maybe I need to incorporate some more exciting things into my conversation to jazz it up.

Pictured: Louis Armstrong, jazzing it up.

Exciting Things I Could Do

– Recount the scarier scenes from the Mummy movies in detail and claim they happened to me!

– Start some conversations by jumping out at the person I need to talk to!

– Incorporate edgy humor, maybe through a sexist standup routine at the beginning of every chat!

– Get some mood swings involved!

– Carry sparklers around with me!

– Serve dessert halfway through every interaction!

I’m not saying talkative people are more interesting than quiet people. I also don’t believe quiet people have the market cornered when it comes to secret depths. The people I find most interesting don’t necessarily have a cool skydiving, or bear-punching*, or travel story, but they always have bizarre quirks. I used to live down the hall from a guy who kept all of his clothes hangers exactly one inch apart, and he was way more fascinating to me than his roommate, whose chest tattoo told some (incredibly stupid) stories

Maybe being intriguing is more about your internal experiences than your external ones. The external ones help shape you, sure, but if you’re relying on them to keep you interesting, I suggest investing heavily in sparklers and cupcakes just in case. 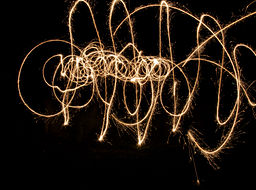 *This is a lie. Some of my favorite stories involve bears getting punched.