Social networks are one of the coolest things about the internet (besides the widespread availability of cat pictures, obviously). Sites like Facebook and Twitter really have changed the way we interact, for better or for worse. I love messing around with new trends in social media, but there are some extremely popular sites I simply don’t get. For example, I’m 80% sure FourSquare exists so burglars know when you’re not home, and I keep using Instagram to take pictures of words, which sort of defeats the purpose. There’s one particular site that’s completely beyond me, though, and I resent it.

Pinterest reminds me of high school lockers, except in this case the locker was designed by Martha Stewart and smells amazing. Some people dedicate the inside of their locker door exclusively to pictures of corgis in sweaters. Some people use it to save messages about positive body image, confusingly combined with pictures of people working out until they fall over dead. Some people just post pictures of their hair. One girl is using the inside of her locker door for pictures of David Bowie during his particularly coked-up years because she didn’t understand she was supposed to be collecting recipes for healthy variations on french fries. That girl is me. 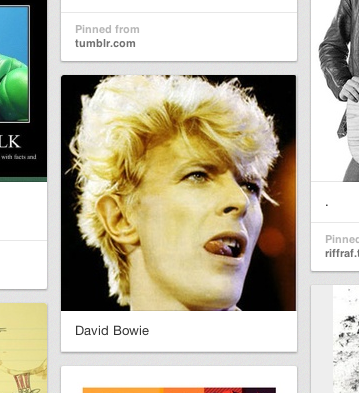 Frighteningly-skinny David Bowie and I have no time for your baked zucchini strips.

Am I Pinteresting Yet?

– So we’re all planning our weddings now, I guess? Is that… is that what this is?

– One time I pinned a link about face paint and more than 500 people re-pinned it. Did I win Pinterest?

– Another time I found myself on there. I literally found a picture of me, from this blog, on someone’s board. What? What?! 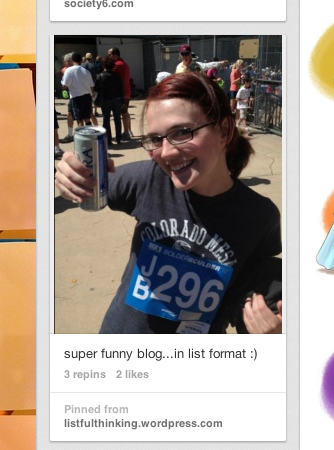 WHAT AM I DOING ON HERE?!

– Who is making all these DIY projects? It can’t be the people on Pinterest, because they’re too busy pinning more projects.

– Apparently everyone is trying the paleo diet and making desserts that can give you diabetes. I know you can’t eat those things while you’re pretending to be a caveman. Why aren’t you sharing them with me?

As baffling as Pinterest is, I keep coming back to it like one day I’ll crack the code and fit in. (This was also my strategy throughout middle school.) Recently, I decided to start consulting Pinterest about very specific things, thinking that would make it more digestible. It’s not really working.

The problem: Last year, I had to scare myself into going to the gym because fear is the only thing that could come between me and Taco Bell. It totally worked, but then I started working 85 hours a week on a congressional campaign. People kept leaving donuts around and I don’t believe in wasting perfectly good breakfast food or working out after a 12-hour day. By Election Day, I couldn’t run 10 feet, much less 10 kilometers.

Pinterest’s solution: My friend and I entered into another workout death pact that ends when we successfully run in this year’s BolderBoulder on Memorial Day. I’ve chosen the unorthodox method of preparing for the 10K by running as little as possible, and Pinterest convinced me that was ok. First it told me to love my body, then it told me to change everything about it. Then it told me about free exercise videos. I never have to go to the gym again! I’ll just aerobic dance my way to the finish line in May!

The thing I didn’t take into account: About 10 minutes into the first video, I remembered I hate dancing. I hate it so much I want to move to that town in Footloose. I’m not a good dancer, largely because my attitude towards my hips hasn’t changed since I hit puberty– maybe if I ignore them, they’ll go away before anyone else notices them. Combining a jerky pelvis with a general lack of coordination is how you end up tangled on the floor of your living room, hoping against hope your neighbor didn’t hear the noise you made when you fell over mid-mambo. 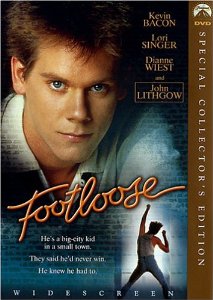 Remember that movie about Kevin Bacon ruining EVERYTHING?

The problem: There’s a room in my apartment between my living room and my bedroom that I don’t use very often, and I’m told that’s where the food comes from. I’m trying to step up my game in there, and Pinterest has all these pretty pastel-colored recipe links. It seemed like a friendly place to start.

Pinterest’s solution: First Pinterest tried to get me to make beet and rice salad, but I solved that problem by making vomit noises until I found a chocolate chip cookie recipe that involved two sticks of butter and all the sugar I had. In other words, everything I’ve ever wanted in a cookie.

The thing I didn’t take into account: Even though the area I live in now is much lower than the one I used to live in, apparently this still counts as high altitude. Evidently no one on Pinterest bakes above sea level. That’s how I ended up with something I like to call Chocolate Chip Cookie Chips, which sound like a brilliant entrepreneurial opportunity but are actually kind of gross. This has not stopped me from eating them. 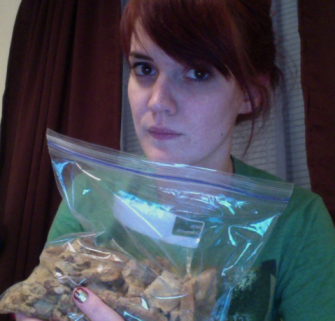 BUT I AM NOT HAPPY ABOUT IT.

The problem: Around the same time Elvis was hitting his stride and Marilyn Monroe was dating Kennedys, my furniture was just coming into its own. Elvis, Marilyn, and the Kennedys are all dead, but my furniture won’t give up the ghost. It’s in desperate need of a facelift.

Pinterest’s solution: Last weekend I found some sites that made paint stripping look simple and I got down to business, covering my dresser drawers with pizzaz.

The thing I didn’t take into account: Like many strippers, paint stripper does not like it when you get handsy. It took the paint right off of my dresser. It also took some skin off my hands and forearms. It hurt pretty badly, but I’m not worried about it. I’m sure someone’s pinned a website with cute ways to cover up chemical burns.