A while back, I went on a few dates with a guy who was really cool. He wore leather jackets and combat boots without looking like he was trying too hard. His hair was a perfectly-sculpted work of rockabilly art. When you really pressured him, he’d reluctantly tell you vague details about his band, which won a national television contest, toured with some major stars, and has its own Vevo channel. He didn’t like to talk about it because it was, like, not even a big deal or whatever. What I’m trying to say is, he was very, very cool.

He was so cool that I couldn’t function around him. When we’d go out to eat, I was elated that this obviously cool person was going on a date with little ole me, but as soon as anyone looked at us, I’d imagine what they were thinking and I’d mentally apologize. “I know! I know!”, I’d think. “He’s extremely cool and I just made a pterodactyl joke and choked on my own spit. IT DOESN’T MAKE SENSE TO ME, EITHER.” It was an exhausting self-esteem roller coaster with way too many bad dinosaur jokes, so we soon went our separate ways. He’s working on another album in Nashville. I’m knitting a misshapen hat. We’re both happier now.

Things That Are Cool

– Motorcycles
– Leather jackets
– Being all “Oh, I don’t watch television”, but making biting, topical pop culture references anyway
– Having a Facebook page, but never using it because “there’s more to life”
– Eschewing digital albums for vinyl records, even when you don’t own a record player
– Sandy’s outfit at the end of Grease
– The frigid vacuum of space
– Friendship bracelets? Maybe?

Clearly I don’t have the best grasp on what’s cool. If I did, I would have been a lot less stressed out between the ages of 11 and 18. I’m better at identifying what isn’t cool.

Things That Are Not Cool

– Mom jeans
– Socks with sandals
– Genocide
– Vests, unless you’ve captained the Millennium Falcon at some point in your smuggling career
– Mullets, except when they’re ironic
– The noises my apartment makes in the night
– A penguin wearing a sweater and eating some soup while wandering through the Sahara on an especially warm day
– What Sandy and Danny are up to these days:

I spent middle school and high school trying way too hard to be cool. Between 11 and 14, I wore more glitter than Ke$ha. I wanted skater shoes, but the closest thing I had was a pair of hiking boots, so I wore them every day. I have a picture of myself wearing those boots, a denim mini skirt, blue eyeshadow, and bright, dyed feathers in my hair, like a side-effect of puberty was sprouting yellow and blue feathers from my head.

I tried just as hard in high school, but my revised plan hinged on the idea that being cool is about more about your attitude. I was going to be so uncool I’d come out the other side cooler than everyone else. I wore my dad’s old sweaters and had earnest conversations with my friends about challenging beauty standards. I drove a 1988 pickup truck with wooden slats that looked like a piece of tin foil someone had crumpled up and then smoothed out again. I stayed home from prom to squish cupcakes with my bare feet, and yet somehow I still wasn’t cool.

It turns out trying to be cool is like trying to escape quicksand– the more you struggle, the faster you sink. Eventually you’re forced to surrender to a nerdy, sandy doom that everyone will tease you about.

By the middle of college, I’d accepted the fact that with 20 solid years of awkward clothing and conversation behind me, I was never going to be  cool. Then something weird happened. Suddenly, things that were not cool when I was doing them as a teenager became very hot.

I Am What One Might Call an “Original Gangster”

– Glasses are in! People with good vision pop the lenses out of reading glasses just to fit in.
– Deathly pallor is in! This is great news for vampires and the melanin-impaired.
– Geek culture is in! When I tell people how awesome my Darth Vader Voice Changing Mask is, they have to nod in agreement or risk social alienation. I also no longer have to pretend to have any athletic ability! You WISH you were a noodle-armed nerd!
– Skinny dudes with weird facial hair are in! This justifies almost every crush I’ve ever had. Thanks, hipsters!
– Ugly sweatshirts are in! In many cases, they are meant to be ironic. In my case, my grandma bought me several comfortable, terrifying Christmas sweaters that are great for freaking people out, so of course I wear them. 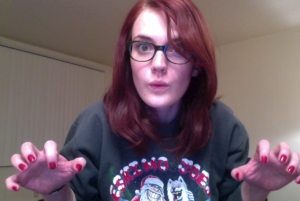 I wear it year-round because every day should be the nightmare before Christmas.

I have a leather jacket now (Fine. It’s pleather.), and more friendship bracelets than I can count, but I guess I didn’t need them. I was born incredibly uncool, and through some bizarre twist of faddish fate, I became… well, I won’t say I’m cool, but I will say I’m not not cool. I’m accidentally all the rage.

I know the pendulum will swing the other way soon, and I’ll recede back into nerdiness. They say you stop caring about what other people think of you as you age, so I’m counting on apathy to get me through my transition back into a fashion pariah.

On the other hand, my inability to adapt to the next fad may actually be even more embarrassing– I’ll be like a mom who can’t let go of her ’90s haircut. I’ve heard it takes the middle of the country about six years to catch on to trends from either coast, so I could always try to outrun my imminent depreciation by moving deeper and deeper into America’s heartland.

Someday I’ll be living in a cave in the middle of Kansas. I will be the coolest one there.

P.S., This is my favorite pterodactyl joke of all time.