Things You Need to Know First

A. When the following events took place, I was a Resident Assistant. An RA is basically a glorified babysitter of college students who has to talk to the cops surprisingly often.

B. I was living and working in a small all-male residence hall (it’s a long story), but the week before this happened, administration moved the top two floors of men out and moved a bunch of girls in. The remaining fellas lived on the basement level.

C. I’m not very good at anything when I first wake up, besides being mean. People fear me in the mornings.

Several years ago, on a very cold March night, I was living with 24 other people in an elderly building with bad heating. The temperature for the whole place was controlled by a switch on the main staircase, and someone had cranked the heat high. It took me forever to fall asleep because I kept tossing and turning, kicking off blankets and layers of clothes. (That’s important. Remember that.)

I finally fell asleep around 4 a.m. and started to have a strange dream. I dreamed that someone knocked on my door in an official-sounding way. In my dream, I got out of bed, stumbled across the room, and opened the door to three policemen. One of those policemen was very handsome. The other two were very not. I was thrilled to be dreaming about people who were so obviously exotic dancers.

Things the Police Were Doing

A. Standing awkwardly in the hallway

Things the Police Were Not Doing

I started to develop a small self-esteem issue. The handsome cop, who was standing closest to me, cleared his throat and looked at the doorjamb about a foot over my head.

“Are you Stephanie?” he asked.

This is a picture of my door: 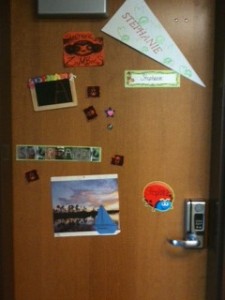 This is after I removed a couple name tags, too.

As you can (kind of) see, my name is on it in seven different places.

Since this was a dream, and I wasn’t afraid of being Tasered, I rolled my eyes, jabbed my thumb at the door and name tags and said, with all the attitude I could muster, “Pfft. Yeah.” The policeman clenched his jaw, but still didn’t look at me.

“Does someone named Cody live here?” he asked.

“Uhhh,” I said, because I was under the impression that strippers don’t ask many questions.

One of the ugly policemen (Why was I dreaming about such homely guys? What kind of dream was this?) asked, “Do any men live here?”

“Yeah,” I said, and then I said something really stupid.

Things One Should Never Say to the Police, Even in Dreams

C. “Yes, there are men in this building. I keep them in the basement.”

I went with Option C. The cops all looked at me very briefly in a confused way, then looked away again. The handsome cop asked handsomely if someone named Annika lived in the building.

“I don’t… I don’t know.” I said. I was bewildered at this point because none of them had produced a boom box, but I was also experiencing some relief because I’d just remembered I didn’t have any cash. On top of that, I was annoyed because this dream wasn’t even about me– I was a supporting actress in my own brain. It was a very confusing time, emotionally.

The fully-clothed policemen, still not making eye contact, thanked me, apologized for bothering me, and left the building. I stood in the hall for a minute, sorting things out in my head, looking down at my feet.

Things I Realized At That Moment

A. I was not wearing any pants.